Kamome Academy's High School Division 1st year, Yashiro Nene, heard of a rumor regarding the school. It is said that the "Hanako-san of the Toilet" will grant any wish in exchange for something that is important to yourself. Nene, who has a wish, desperately wants to come true and heads to the old school building's girls' toilet to summon Hanako-san. However, the one who appeared is... a ghost of a boy?![2]

Yashiro Nene is looking for ghostly help with her love life, but when "Hanako-san," the wish-granting spirit that haunts a girls' bathroom stall, turns out to be a boy, she may end up getting more, and less, than she bargained for.[1]

One student tells another about the Seven Mysteries of the school, of which the most famous is No.7: "Hanako-san of the Toilet".

Yashiro Nene summons Hanako, who turns out to be a boy. He says that she can call him "Hanako-kun" instead, though everything else she has heard about him is true, and asks what her wish is. Nene introduces herself and says her wish is to have her feelings reciprocated right away by the person she likes: "Minamoto-senpai" (Minamoto Teru) from second year, who is known as the prince of the school.

Hanako agrees to fulfill her wish, but offers a tattered self-help book of love strategies instead of a special tool like Nene had expected. He explains that this is safer, since borrowing a supernatural's power comes with an equivalent price, and he doesn't have any such tools anyway. Reading Method 78 ("Leverage your special skills") from the book, Hanako asks Nene if she has any skills.

Nene reveals that her special skill is gardening, which she began (along with cooking and sewing) because the boy she used to like had said that he preferred feminine girls. Nene had liked him since soon after starting middle school, and confessed to him one month ago, after three years of honing her skills. But he bluntly rejected her, saying he didn't know who she was, and that someone with radish legs like her wasn't his type.

Nene resolutely claims that she isn't bothered by it anymore, saying that she'll show that boy up by having her feelings reciprocated by an amazing person like Teru. Hanako comments that this really means she's fine with it being anyone. Nene denies this, but Hanako points out that she knows almost nothing about Teru, not even his first name. Unable to answer, Nene tries to change the topic. Hanako offers her a heart-shaped message card and a pen instead, telling her to gift Teru something she's planted. Nene eventually agrees, deciding to write a thank-you note on the card (since Teru helped to pick up her pencil case recently) as a confession would seem too hasty.

The next morning, Teru finds tomatoes and cucumbers with a thank-you card on his desk, causing a ruckus over the strange occurrence. Nene, who had been secretly watching with Hanako, is very embarrassed and says that she'll quit gardening. Hanako suggests switching to her other special skills instead, but their next three strategies (Nene sewing a button back on for Teru, making a character bento for him, and colliding with him in the corridor) also fail for various reasons.

Back at the toilet, Nene laments the failures and says there should be a more direct way, to which Hanako suggests confessing to Teru. When Nene vehemently rejects this, Hanako says it's the only idea he has left since he's also new to this. Nene is shocked to hear it. Hanako replies that few people have called or are able to call on him. Nene says that this explains why he's only given her ordinary items and chaste strategies despite being a ghost. Trying to refute this, Hanako shows her a kokeshi doll (which he claims is slightly erotic) but Nene tosses it out the toilet window.

Nene then notices a pouch that Hanako had dropped earlier. Opening it, Nene finds two sparkling disc-like objects and asks Hanako what they are. When he answers that they're for matchmaking, Nene puts one into her mouth before Hanako can stop her. He explains that they're mermaid scales, and that those who consume scales taken from the same mermaid will receive a dreadful curse, in exchange for a very strong bond. On hearing this, Nene swallows the scale. She says that being cursed is alright if it means Teru will reciprocate her feelings, calling Hanako a liar before running away.

When Nene finally finds Teru, there's already a girl confessing to him. Teru declines, saying that there's already someone he likes, though Nene thinks to herself that it wouldn't matter anyway with the mermaid scale. She suddenly realizes that scales have appeared on her hands and arms, and wonders how things turned out like this, despite her hard work. Nene then admits that she's almost never talked to the people she likes, nor even gotten them to know her name. She had been working on the wrong things while being certain that she'd be rewarded for them, to the point of asking a supernatural for help, so now she's just reaping what she had sown.

Hanako finds her just in time. Nene realizes that she's in water and able to breathe. It's revealed that Nene has turned into a fish, and is now inside a fish tank Hanako had decorated. Hanako explains that this is the price: the curse has completely turned Nene into a fish, though the effect could've been weakened if someone had swallowed the other scale. Hanako asks why Nene hadn't used it, and she explains her realization: she was only trying to make use of Teru rather than actually liking him, and (as Hanako had said previously) anyone would do as long as the feelings could be mutual, which turns out to be her true wish.

The mermaid then appears to receive Nene as her servant. Batting Hanako aside, the mermaid picks up Nene's fish tank. Hanako asks the mermaid to let him fulfill Nene's wish first, but when she refuses, he draws a kitchen knife and slashes her underside, forcing her to temporarily retreat without successfully obtaining Nene. To fulfill lNene's wish of becoming human again, Hanako swallows the scale, bonding them and allowing him to suppress the curse on her. Nene becomes his assistant in exchange, and finds that she's able to touch Hanako now because of the bond. Hanako has granted two of her wishes: wanting to become human again, and wanting to have her feelings reciprocated by someone (which he says means the same as being bonded, to her). He then tells her that the scales will disappear by drying them. 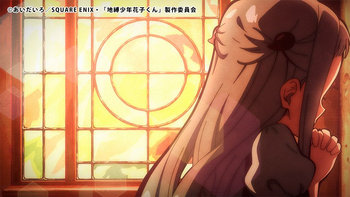 Retrieved from "https://hanakokun.fandom.com/wiki/Episode_1?oldid=17979"
Community content is available under CC-BY-SA unless otherwise noted.